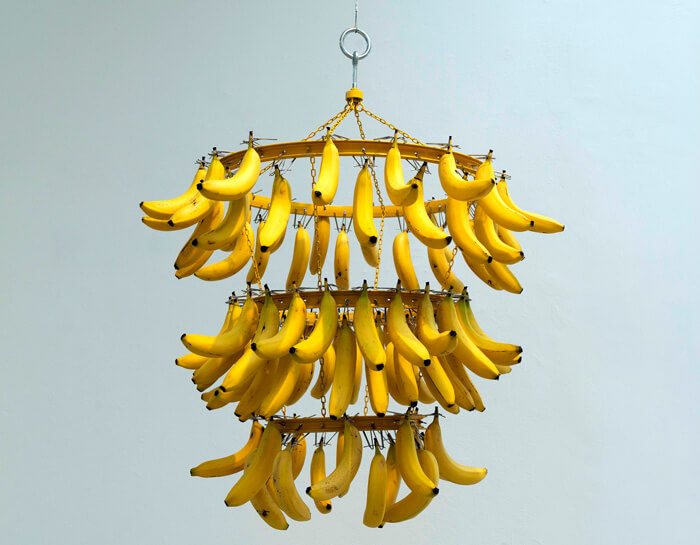 Jean-Marc Hunt uses accumulation and appropriation as work methods. Banane deluxe is a work in the form of a chandelier suspended from the ceiling and composed of a metal structure and dozens of bananas. The perishable quality of bananas transforms the piece into an ephemeral work that calls attention to the risk of squandering natural resources. Hunt places the bananas in rows to create a fan which evokes the iconic costume worn by the famous dancer Josephine Baker, a revealing belt skirt made from artificial bananas that Baker used during her Paris shows to satisfy the expectations of the European public who associated jazz and exoticism with blackness during the French colonial empire period at the end of the 1920s. In this work Hunt also pays homage to the legendary song Strange Fruit (1939) by Billie Holiday, that became popular during the civil rights movement in USA due to its description of the lynching of African Americans as “strange fruit hanging from the trees”. The bananas in this piece can also be seen as symbols of lust, wealth and vanity relating to the sex and luxury tourism industries in the modern day Caribbean.