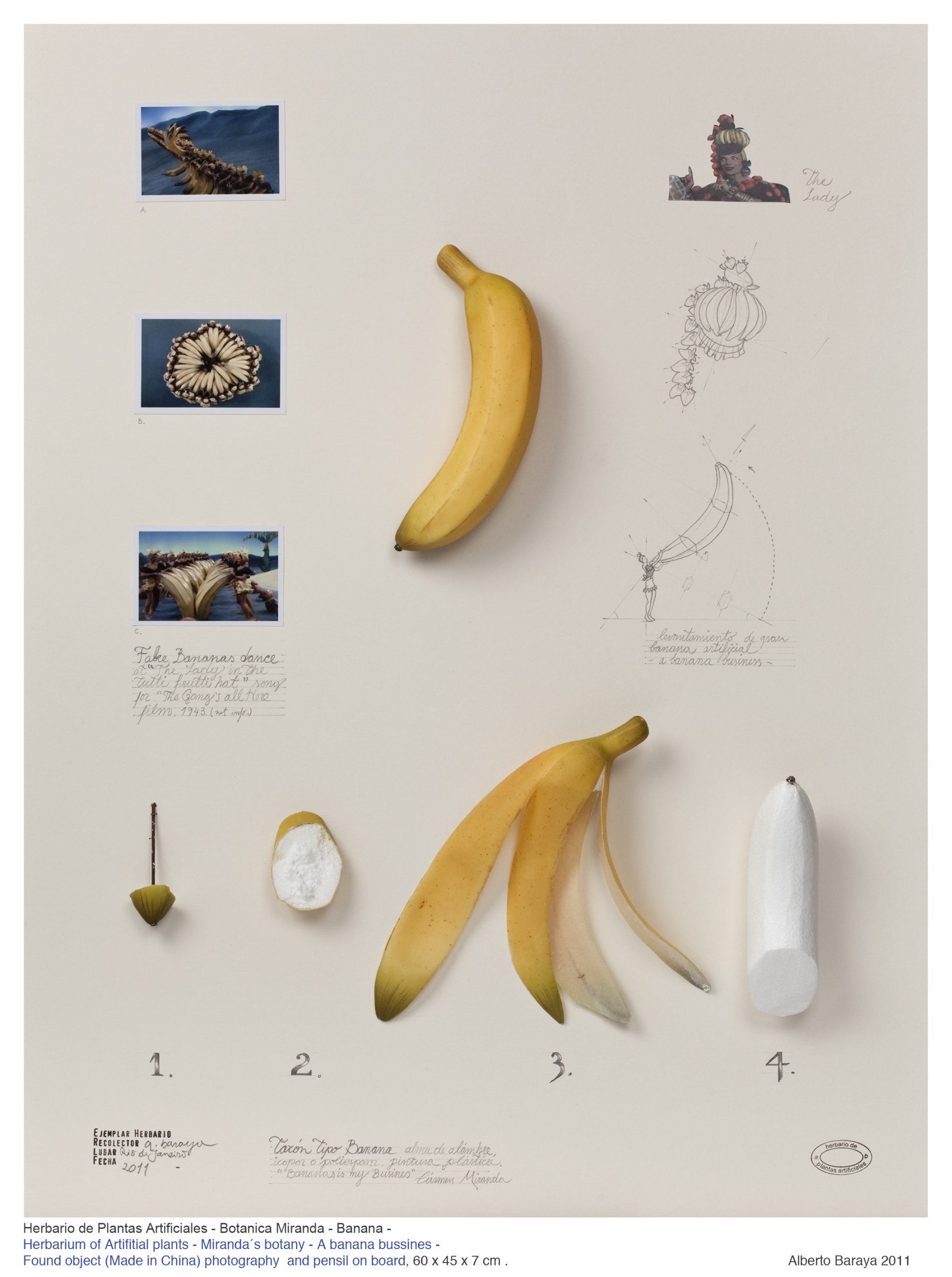 In his signature series “Herbario de plantas artificiales,” Alberto Baraya challenges the reductionist view that sometimes characterises cataloguing practices. Since 2001, the Colombian artist has been collecting artificial plants and subjecting them to taxonomic dissection based on the Linnaean botanical cataloguing principles, which were developed in the 18th century and used for the José Celestino Mutis-led Royal Botanical Expedition to New Granada. By doing this, Baraya alludes to the colonial implications involved in the schemes for cataloguing and displaying natural resources, which sought to transform, understand and control nature. Baraya here mimics the scientific modus operandi, splitting the botanical samples and then deconstructing and reconstructing them on a neutral background, with notes and drawings that pretend to explain the functions of the different parts of the “species”. But Baraya’s flower cannot be found in nature. Instead, the artist collects plants from the street or snatches them from waiting rooms, restaurants, funeral parlours, or anywhere else where he can find them. Through this series, Baraya questions and parodies empirical knowledge, and its colonial background, in order to create an absurd cataloguing system.

Frutales Carmen Miranda: Banana Miranda is part of the series of works that make up the “Herbario” series. The work was created specifically for the exhibition El banano es mi negocio: el estilo sudamericano, curated by Pablo León de la Barra and Julieta González for the Carmen Miranda Museum in Rio de Janeiro. In this piece, Baraya dissects a plastic banana to challenge the notions of “tropical iconography” and the ideas of exoticisation and self-exoticisation associated with the bananas, the tropics and its peoples. The fruit appears alongside three stills from the film The Gang’s All Here (1943), in which the Brazilian actress Carmen Miranda performs a “banana dance” with a group of women using large artificial bananas to produce repetitive visual effects, as shown in the photographs. The work also includes a cropped picture of Carmen Miranda taken from the film and two drawings by Baraya. One of the drawings is an ironic portrayal of the dance step when the dancers lift up their artificial bananas and the other is a depiction of the “banana headdress” worn by Miranda. Both Miranda herself and her iconic tutti frutti hat have become unfortunate emblems of the stereotyped perceptions of Latin Americans, especially women. Baraya’s work explores not only the pressing issues of reducing gender and race to stereotypes but also how multinationals profit from Latin America’s crops and how they continue influencing the media and cultural constructs of the region known as the Global South.