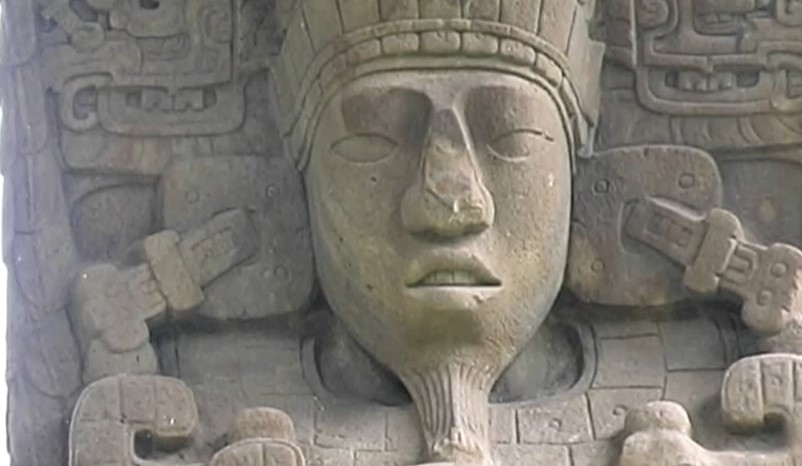 Paradox is an experimental documentary video in which Argentine artist Leandro Katz explores the contradictions inherent between the splendid past of the Mesoamerican societies and the poor living conditions of the inhabitants of regions that were once occupied by indigenous people.  In the video, Katz juxtaposes shots of a Mayan altar carefully carved out of stone, known popularly as “The Dragon of Quiriguá,” and scenes of workers on a banana plantation located in the same region of Quiriguá, in southern Guatemala.  The Dragon is a monument that recalls the splendour of the Mayan civilization that was preserved in the area in spite of the deforestation produced by the entrance of the banana companies.  In this way, Quiriguá is a place where the splendid ancient past lives with the contemporary realities of the banana workers.  The video starts with a sequence of still shots of details of the Mayan stone carving.  In the background, you can hear the sounds of the jungle.  Directly, the video jumps to shots that show the journey that the banana bunches take, already cut from the plants and protected by plastic bags, while hanging from a precarious system of transportation directed by a man who controls it using a gasoline engine.  The video jumps between shots of the monument, which gradually become more open, and the plantation workers who cut, wash, and pack the fruit.  Some shots are portraits of the same workers who pose in front of the camera with bunches of bananas in the background or display to the camera animals and pre-Hispanic objects that refer to that ancient past. The video ends with archived images of old photographs that portray the long history of the banana growers in the area, and some images from engravings made by Frederick Catherwood during the first explorations of the Mayan ruins in the area, which reactivated interest in the plundering of the indigenous past.  But in the contemporary Guatemala that the artist presents, the resources that go north are now fruits instead of (archeological) artifacts.