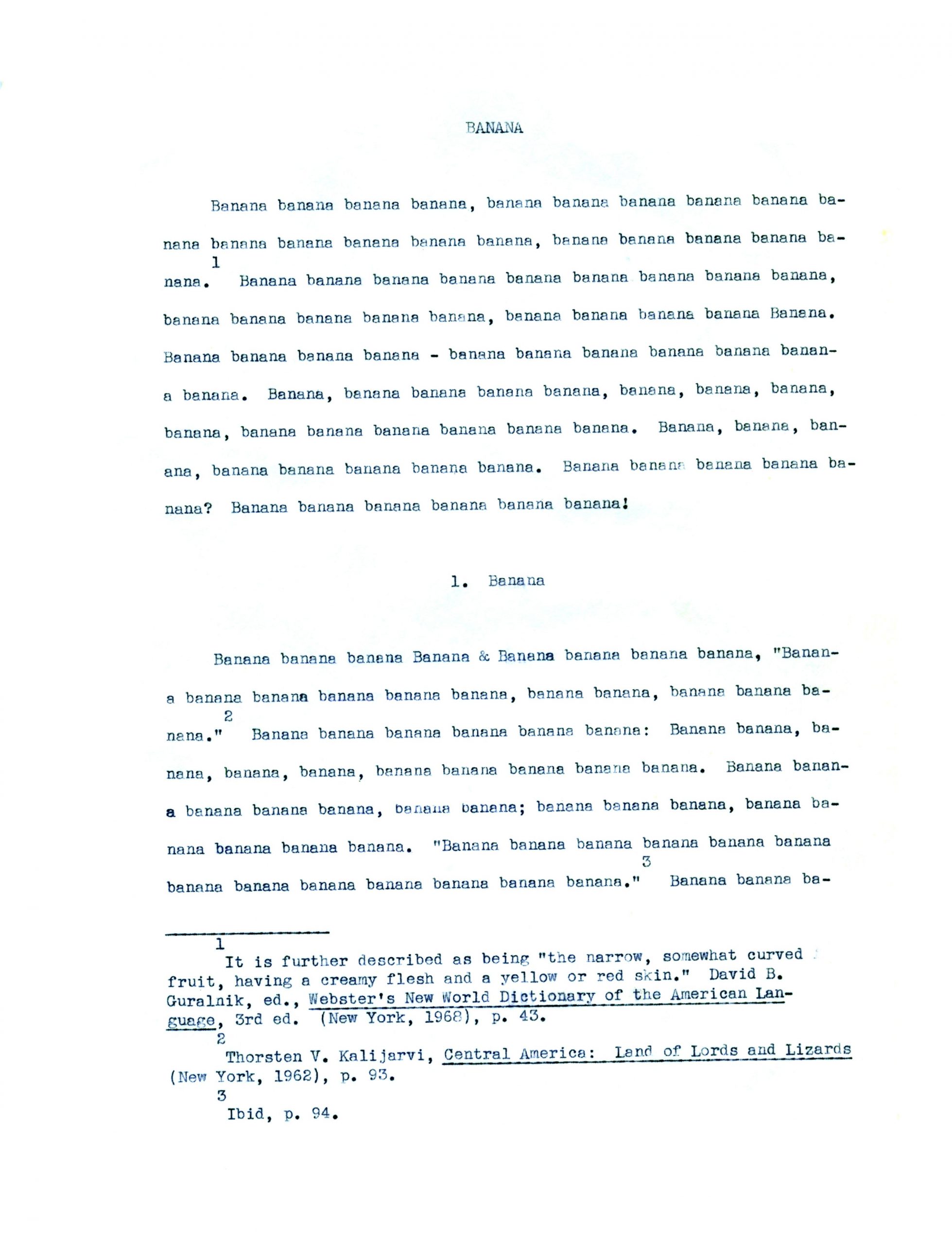 To meet one of the degree requirements to obtain a master’s degree in plastic arts from Florida State University, Costa Rican artist Victoria Cabezas created a manuscript that contains only the word “banana” written over and over again, visually replicating the precepts of the writing to form sentences and paragraphs. These visual structures are accompanied by footnotes in which the artist narrates in detail the impact and the repercussions of the main banana company of the United States – The United Fruit Company – in Latin America. The piece can be read as having multiple layers. Firstly, Banana Thesis parodies academic language while highlighting the political, social, and economic implications of this company’s interventions in Central and South American territories. Secondly, since the piece is made up of both the manuscript and a performance in which Cabezas reads the thesis (including the footnotes), the word “banana” acquires a new connotation. Reading the thesis in English (the language in which it was written), with its accent and punctuation inflections, the word “banana” is understood as “madness”, one of its connotations in expressions of popular American language, an example being “this is bananas”. The performance is accompanied by a projection of the thesis pages as well as the corresponding annexes. In fact, Cabezas’ reading is interrupted from time to time by a series of songs and videos, such as the song Yes, We Have No Bananas and the original advertisement for Chiquita Brands. The original song by Frank Silver and Irving Cohn was appropriated by multiple bands like Spike Jones and His City Slickers. The lyrics of the song exoticize and mock the accent of a street fruit vendor from Greece and make a play on words of the word “banana”. This song was popularised in the 1932 Belfast protests and has been appropriated by different communities in times of food shortages such as post-war England. For its part, the Chiquita Brands advertisement tells the story of an anthropomorphic “banana” that arrives after a boat trip to an English-speaking country to explain to the locals how to consume the fruit and how to keep it fresh. The animated character is an imitation of one created by the Brazilian singer Carmen Miranda and reiterates the exoticization of the female figure. Although Cabezas’ work was written in 1973, and therefore the sources consulted in her research correspond to this historical period, the document seems to still have relevance today considering the current neo-imperialist interference of the United States in countries such as Ecuador or Costa Rica itself, the artist’s birth country.