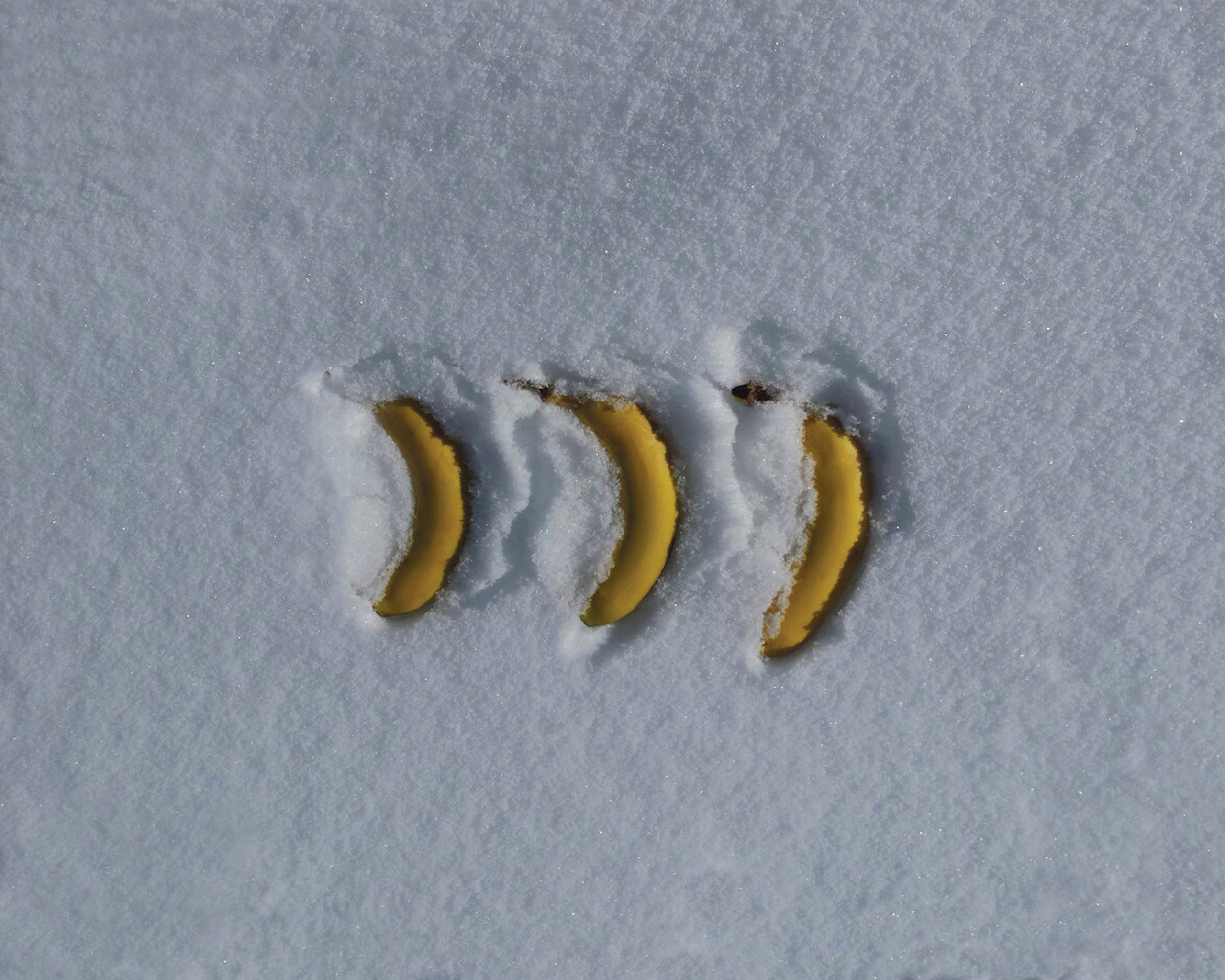 CreditS: Photo courtesy of the No Bienal

Frozen Bananas is a photograph showing three bananas cut in half lengthways and placed on the snow. The fruit, empty inside but bright yellow, stands out against the white background of the ice. This photograph forms part of the series ‘Love Me Not’ in which Marco Guevara exhibits what he calls “conditioned relationships”, meaning relationships which have apparently good intentions but which eventually lead to power imbalances. Looking into the origin of the fruit consumed in locations of hegemonic economic power, like the United States and Europe, it is evident that in the case of bananas and pineapples the majority comes from countries like Costa Rica. The exportation of these products must adhere to a series of conditions and processes. For example, the fruit’s ripeness must not exceed a certain level, the size must meet certain standards and the fruit must be packed in containers of ice so that it reaches foreign markets in good condition. As a result, the fruit also changes and loses part of its taste and colour, which is part of what makes it unique in the first place. Guevara highlights the parallel between the journey the fruit makes and the migration of people who must satisfy a set of requirements in order to be able to enter places which in theory offer better opportunities.

This work was presented in 2017 under the curatorship of Yamil de la Paz in an exhibition entitled Diez años de controversia as part of La No Bienal in Costa Rica which took place in the Spanish cultural centre (El Farolito) and the independent art venue C.R.A.C.art. The curatorial proposal invited artists to send works that responded to what had happened in the 10 years following the signing of the free trade agreement between Central America, the Dominican Republic and the United States. Although the treaty polarised public opinion in Costa Rica, it was approved through a referendum which took place in October 2007 and it came into force in January 2009. Ten years after its introduction the artists reflected on the impact of the treaty from different perspectives. Many of them felt that it maintained and exacerbated the country’s pressing social and economic issues. As a response to this situation Guevara sent the piece Frozen Bananas. In this piece, the banana, an emblematic export fruit in Costa Rica, appears in the photo as frozen in time and space. The image suggests that the power dynamics and the debates brought about by the actions of the US business United Fruit Company in Costa Rica at the beginning of the 20th century seem not to have changed since then.