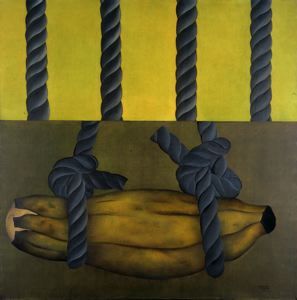 Credits: Blanton Museum of Art, The University of Texas at Austin, Gift of Barbara Duncan, 1975

Between 1967 and 1977, using a realist painting style that closely resembles the aesthetics of US pop art, the Brazilian artist Antonio Henrique Amaral created a series of paintings where the image of the banana predominates. In Sozinho em verde, the artist splits the pictorial space in two. In the bottom part we see a ripe banana that is bound by two pieces of rope. These tie the ends of the fruit so tightly that the skin at one end has burst open. The top part of the painting is more abstract. Here we see what appears to be four pieces of the same rope that secured the banana in the bottom part but here they are shown as a series of verticals that are superimposed onto a bright yellow background. Using a visual metaphor, the work alludes to the repression in Brazil at the time the painting was made. The pieces of rope in the top part are reminiscent of prison bars while the restrained fruit alludes to the torture methods used by the dictatorship at that time. Green and yellow—the colours of the Brazilian flag—predominate and so the image of the banana can also be interpreted as a tropical symbol of the outside world’s perception of Brazil as an idyllic place. As with many other Latin American artists who produced critical work under dictatorial regimes, in this series of paintings Amaral epitomises his search for the space and means to convey dissent without censorship and repression and so be able to express political criticism through his artistic work. As Amaral himself remarked in an interview: “they can’t censor bananas”.